Introduction to copyright protections, exceptions such as fair use, public domain, Creative Commons, and more. 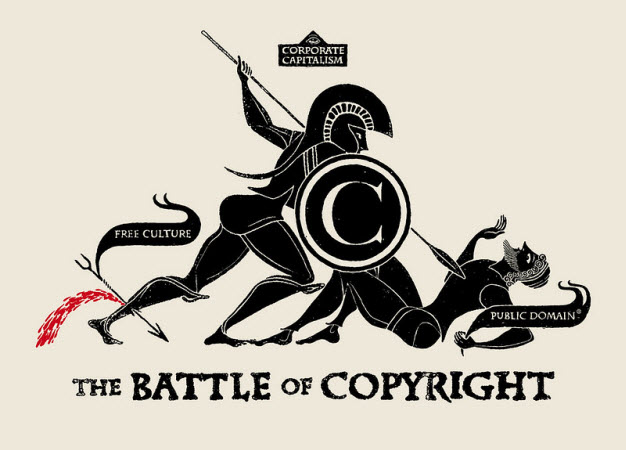 Technology and law can have a contentious relationship. Advanced in technology can result in changes to law. For example, land property rights in America used to extend from the land itself infinitely into the sky, but the invention of the airplane resulted in limits on that, because otherwise airlines would need to get permission to travel over every piece of private property they flew over. However, law has also been used to try to limit and control new technologies. The development of the Internet has created the possibility for the majority of the population to share creative work on a mass scale for the first time. However, at the same time, changes to copyright law expanded copyright protections beyond what had traditionally covered, which granted copyright owners a level of power they never had before and especially benefits powerful corporate copyright holders as they sought to use the Internet to their advantage (Lessig 1-12).

One group trying to create a more open creative culture is Creative Commons. Creative Commons created a method of sharing your work that work with the existing copyright system but grants creators the ability to give up a level of control of their work so that it can be freely used by others without needing to ask for permissions (Lessig 282-286).

What are Creative Commons Licenses?

"What are Creative Commons Licenses?" by U of G Library is used under a CC BY-NC-SA 4.0 license.

Elements of a Creative Commons License

All Creative Commons licenses are made up of combinations of four elements that set limits on how a work can be used:

All Creative Commons licenses include the Attribution element. No license can include both the No Derivative Works and Share Alike elements, since you can't share a derivative work under the same license if derivative works aren't allowed.

There are 6 Creative Commons licenses. Links are to summaries of the license.

Creative Commons also has the CC0 public domain dedication, which operates differently than the 6 licenses but also exists to promote open sharing of creative works.

Creative Commons licenses can be organized along a spectrum from the most restrictive and like full copyright protections to the most permissive and like the public domain. 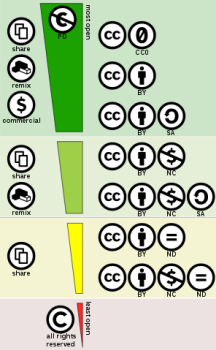 Creative Commons License Spectrum by Shaddim used under a CC BY 4.0 license.

Creative Common's license chooser will ask you a series of questions to help you think through what license you should apply to your work. They will also generate language for you to use when sharing your license information.